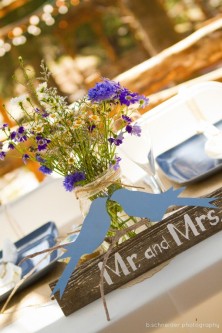 A couple weeks ago I came down with the flu pretty bad and spent the majority of my time on the couch watching TV. My husband and I generally stick to Food Network and HGTV, but I felt like switching it up a bit. A few hours later, I had watched episode after episode of Four Weddings and Say Yes To The Dress.

I’d like to blame my marathon on being sick, but there’s something about those shows that are rather addicting. I just couldn’t switch the channel. If you’ve never seen either show (don’t start, you’ll never stop), all you need to know is that there are plenty of opinions flying around and more often than not, those opinions are not the bride or groom’s.

After so many episodes of other people’s opinions about dresses, food, venue, music, and the like being thrown around about a wedding that wasn’t theres, I was getting a little peeved. A wedding isn’t about the guest’s preferences, it’s about what the bride and groom want.

One of my all-encompassing pieces of wedding advice is to make the day, and the events surrounding it, as much a reflection of the people getting married as possible. A wedding celebrates the union of two individuals, so those two individuals should show up in more than just bodily form.

The underlying theme of any wedding should be the Mr. and Mrs. Elements like food, attire, destination, and decor should all reflect the taste and personality of the bride and groom. If your dress doesn’t leave bridesmaids saying, “oh, that’s so you!” or your reception play list doesn’t remind your friends of all the Fridays you spent line dancing then you haven’t done your celebration justice.

Though I’ve been guilty of this, it shouldn’t be a guest’s place to judge your day based on their picture of the perfect wedding. And I believe that’s why shows like Four Weddings get me riled up, despite how enjoyable they are to watch… They promote the idea that a wedding should please everyone.

All of the church ceremony, live music, 3-course dinner, non-dancing, Saturday, black-tie lovers would have been disappointed by my own wedding. However, I’d venture to say that most of our guests drove away thinking the ceremony and reception perfectly captured who Tim and I are as a couple.

That’s exactly what your wedding should leave people thinking.

Check back next week for some fun ways to make your wedding a Mr. and Mrs. wedding!

Read all of our Wedding Videography Reviews at